Today we speak about an interesting practice in Rome during Lent, a journey into a long meditation on the Passion of Christ by visiting the Station Churches of Rome from Ash Wednesday until the first Sunday after Easter.

So now we can understand that the Station Churches are places where are celebrated the stations of the Cross by the faithful guided by the bishop of Rome, the Pope. So this Churches are historical places where the Pope used to celebrate Mass with his community. We believe that the pilgrimage to the Station Churches was created by  Pope Gregory the Great in the VI-VII century, at every day of Lent it was assigned a different Church. Traditionally the people was going to meet in a Church and walk to the Station Church of the day in a procession by singing. In the Churches the relics were exposed. During the XIV century this procedure of the Station Churches was interrupted due to the fact that the Popes were in Avignon. The Pope that really gave a strong impulse to reestablish the tradition was Pope John XXIII.

These 44 days of Pilgrimage into the Station Churches starts on Ash Wednesday with the first Church on the Aventine, the Church of St. Sabine. Mass here starts very early at 6:45 so if you want to be on time you have to get up very early. Normally the Pope comes to this Church to start the beginning of Lent and so there is a lot of people. In the ancient time people used to meet at the Church of St. Anastasia at the foot of the Palatine hill after received the ashes and from there ,they were walking in pilgrimage, to the Church of St. Sabine. Today the walk it is much smaller…. they meet in front of St. Anselmo, right on the Aventine and from there they walk to St. Sabine.

We should write a long post about St. Sabine a Church,  but I just want to give you few bites. It was founded on 425 by Peter of Illyria on top of “titulus Sabinae”, the house of the ancient roman matron identified by the Saint from Umbria Region. Many Popes from Sixtus III enriched the Church and on 1222 it was given to the Dominicans by Pope Onorius III dating at his time you can admire part of the bell tower and the cloister. Pope Gregory the Great considered it a jewel , he established that from here on the Ash Wednesday , it would start the visit of the the Station Churches , even if we are not sure why this church, the best hypothesis is that because this is on top of a hill  and the walk to it it is a good spiritual and physical exercise to start Lent. The Aventine was one of the area of Rome were the early Christian Community was big.

A church with lots of works of art. We can see the first image of a Crucifixion …. where…. the entrance door in ceder wood dating back the V century, it has 28 panels with scenes of the Old and New Testament , showing in a sort of comparison Moses ( the Law) and Christ (the Gospel). The Crucifixion is on the first panel from top left, this is the oldest image of the Crucifixion when in art Jesus was depicted with open eyes. The door was restored on 1836 and according to some historian we know that on the panel representing the Cross of the Red Sea the Pharaoh has the face of Napoleon…. wow this is really something!

In this Church we know some important people lived, such as St. Dominique , St. Thomas Aquinas, and Pope St. Pius V and St. Hyacinth a Dominican Polish who from here left to evangelized Poland and also Russia. His work of evangelization gave him the title of apostle of Europe, inside the Church you can admire a Chapel dedicated to him with a great fresco by Federico Zuccari depicting the Saint receiving the monastic habit given by St. Dominique. Under the main altar we have the remains of St. Sabine , St. Invenzio, St. Teodula and Pope St. Alexander I. 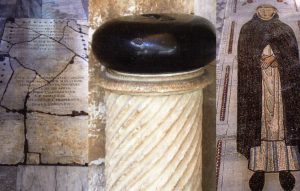 A Legend is connected with this Church, it is about a black stone on top of a column . Tradition says that the devil tried to throw it against St. Dominique while he was praying in the church. St. Dominique was not hit by it, because it was praying somewhere else and the stone broke a funerary stele.

The Church has 24 corinthian columns  from pagan temples located nearby and it has 3 naves, the architectural structure is a basilica plan of the early Christian churches, even if it is not the V century church anymore, the atmosphere you have inside is incredible. The Abs has a wonderful fresco painted by Taddeo Zuccari realized on 1560 representing Jesus sat on the mountain surrounded by the Apostles and the Saints buried in the Church.

Lent tradition of the Station Churches starts with St. Sabine a jewel of art, early Christian images, ancient pagan architectural pieces, a place where we can meditate about the Passion of Christ and about our journey on this world. 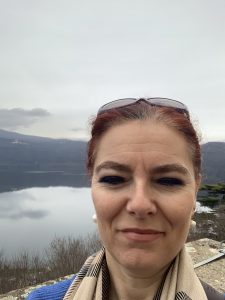 In Castel Gandolfo there is a a small Vatican outside the big Vatican in Rome. If you want to enjoy history of Papacy, curiosity inside the summer papal apartment, great view of a vulcano lake, old roman ruins of an imperial villa, great gardens of Popes, great roman food you have to take a day trip to Castelgandolfo.

This small town, in the so called Alban hills, the history go back to the founder of Rome and his twin brother, the famous Romulus and Remo. According to tradition Castel Gandolfo is the sight of the ancient Albalonga, founded by Ascanio the son of Enea , the hero escaped the city of Troy, successors of this family were Romulus and Remo, sons of the Vestal Vergin Rea Silvia who abandonment them on a basket on the Tiber River….. and then the mitical foundation of Rome , 21 of April 753 b.C.

The city of Castelgandolfo house the summer residence of the Popes, this incredible residence developed during fews centuries, inside of it you can discover a small museum where it is possible to understand what Papacy meant during the century when the Pope was consider a King, you discover uniforms of the noble guard of the Pope, objects belonged to Popes, Portraits of Popes and you will have the opportunity to visit the Pope’s private apartment. You will visit his private bedroom discovering the special events which took place in it.

The summer residence of the Pope is more, the nice stroll on an electrical golf cart make you discover the peaceful gardens of the Villa with the ruins of the Emperor Domitian spread here and there to make dream of the old roman days. 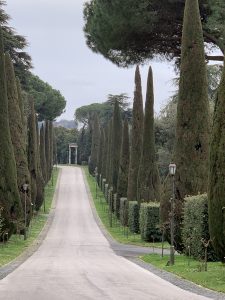 Castelgandolfo is also food, the town is famous of the festival of the peaches, but in the many restaurants of the small towns you can enjoy a great lunch or dinner overlooking the lake.

To do miss this great town and its history! 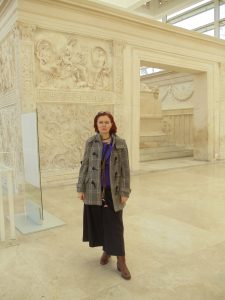 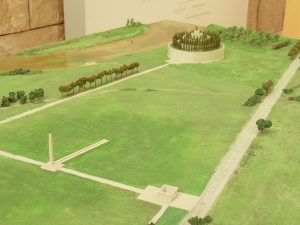 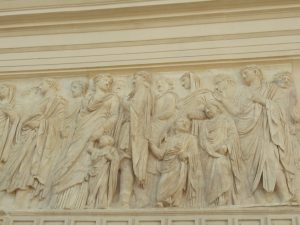